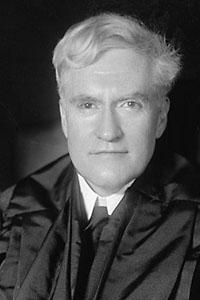 Benjamin N. Cardozo was a lawyer with serious mojo. He began his law career in 1891, having passed the New York bar exam despite an uncompleted term at Colombia Law. He co-founded the firm of Simpson, Warren & Cardozo, and practiced there for 23 years.

He eventually would serve as a judge at the New York Court of Appeals (New York’s highest court) for 18 years, before service as an Associate Justice of the US Supreme Court from 1932 to 1938. He was appointed by President Hoover to replace the iconic Oliver Wendell Holmes.

During a time of rapid industrialization, Cardozo is known for his rulings in contract and tort law. As a Supreme Court Justice, Cardozo was a member of the so-called “Three Musketeers”, along with Louis Brandeis and Harlan Stone, in issuing opinions generally supportive of the New Deal agenda of Franklin D. Roosevelt during the Great Depression.

A small sampling of his wisdom:

The law has outgrown its primitive stage of formalism when the precise word was the sovereign talisman, and every slip was fatal. It takes a broader view today. A promise may be lacking, and yet the whole writing may be "instinct with an obligation," imperfectly expressed ….

Not honesty alone, but the punctilio of an honor the most sensitive, is then the standard of behavior.

Fraud includes the pretense of knowledge when knowledge there is none.

Membership in the bar is a privilege burdened with conditions.

Danger invites rescue. The cry of distress is the summons to relief ... The emergency begets the man. The wrongdoer may not have foreseen the coming of a deliverer. He is accountable as if he had.

The Constitution was framed under the dominion of a political philosophy less parochial in range. It was framed upon the theory that the peoples of the several states must sink or swim together, and that in the long run prosperity and salvation are in union and not division.

Being smart is important. Being smart is what got us through our education and is a necessary element of being an effective lawyer. However, intelligence quickly moves from being a very important factor in your professional success to only one of many elements ....

Redline is now LIVE
Arena lawyer
Moderate respectability with a dash of prestigious servitude
The power of peer production
Lawyers with low psychic energy
Elaborate living by lawyers is rare
Deal lawyers—shirkers and grand-standers, the lot of you
The dignity of legal representation
A lawyer with mojo: Hong Yen Chang
I call bullshit