Keyrock for the plaintiff your honor 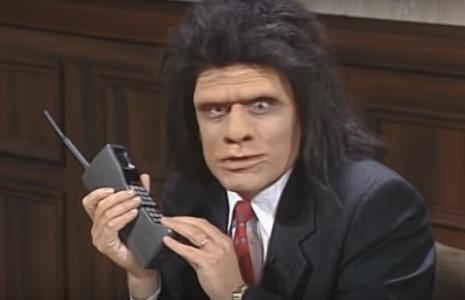 In the nineties, Saturday Night Live ran a series of skits centered around an unfrozen caveman lawyer, played by Phil Hartman. This was a typical episode:

One hundred thousand years ago, a caveman was out hunting on the frozen wastes when he slipped and fell into a crevasse. In 1988, he was discovered by some scientists and thawed out.

He then went to law school and became … Unfrozen Caveman Lawyer.

He used to be a caveman,
but now he's a lawyer.
Unfrozen Caveman Lawyer!

(open on interior courtroom, the judge banging her gavel)

Mr. Keyrock, are you ready to give your summation?

Ladies and gentlemen of the jury, I'm just a caveman. I fell on some ice and later got thawed out by some of your scientists. Your world frightens and confuses me! Sometimes the honking horns of your traffic make me want to get out of my BMW, and run off into the hills, or wherever. Sometimes when I get a message on my fax machine, I wonder: did little demons get inside and type it? I don't know! My primitive mind can't grasp these concepts.

But there is one thing I do know—when a man like my client slips and falls on a sidewalk in front of a public library, then he is entitled to no less than two million in compensatory damages, and two million in punitive damages. Thank you.

The jury will now retire to deliberate.

Your Honor, we don't need to retire. Keyrock's words are just as true now as they were in his time. We give the full amount.

Did you hear that, Mr. Keyrock?

(cell phone to his ear)

I-I'm sorry, your Honor. I was listening to the magic voices coming out of this strange modern invention ....